Rizpah: A Woman of Passion 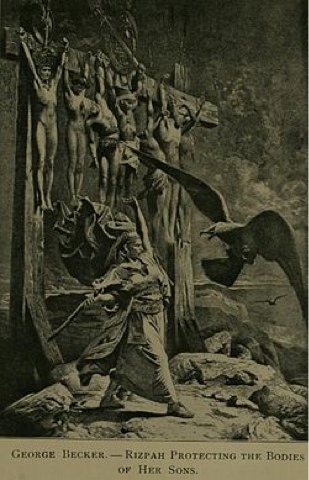 Rizpah is the mother of two sons born to Saul: Armoni and Mephibosheth. (Not to be confused with the Mephibosheth who is the son of Jonathan.)

The Story (Found in 2 Samuel 21)
During the reign of King David there was a famine in the land. When David inquired of the Lord concerning the famine, the Lord said, "There is bloodguilt on Saul and his house because he put the Gibeonites to death." So, David called the Gibeonites to see what they wanted in order to make amends for this bloodguilt and hopefully end the famine. The Gibeonites wanted seven of Saul's sons. David chose the two sons of Rizpah along with the five sons of Merab. David "game them into the hands of the Gibeonites, and they hanged them on the mountain before the Lord, and the seven of them perished together."

Rizpah takes a sackcloth, speeds it on a rock, and endures the elements in order to protect the bodies of her sons and the other five men. "She did not allow the birds of the air to come upon them by day, or the beasts of the fields by night."

David is eventually told what Rizpah is doing and in response he gathers the bones of Saul, Jonathan, and the men who were hanged and gives them a burial.

At the end of the story we see, "And after that, God responded to the plea for the land."

When I first began thinking about Rizpah earlier this week my mind immediately went to another grieving mother. In Luke 7 we see Jesus have compassion on a widow who has lost her only son. Not only does Jesus tenderly approach her and entreat her to not cry, he raises her son from death.


However, while I think there can be parallels between the two stories, the more I thought about it the more I saw the striking difference.

Rizpah was not simply grieving, she was passionate and outraged. She literally devoted her days and her nights to keeping the bodies of her sons free from harm. She likely did not have much, if any, of a voice in the culture at the time. She could not hold peace rallies or start an organization to advocate for the cessation of needless violent deaths. She could not theorize or theologize about the implications of hanging young men to erase a bloodguilt. Her voice was most likely silenced, but her presence and her being was not.


If you google "Rizpah" (which I did) you will run across a quotation from a Jewish theologian, Jonathan Magonet, who describes Rizpah as "every mother who sees her sons killed before their time for reasons of state, be they in time of peace or in war. All that remains is for her to preserve the dignity of their memory and live on to bear witness and call to account the rulers of the world." (From his book, Bible Lives)

Her protest, her witness, her ability to get the rulers of the world to face their decisions that leave men hanging in the fields as food for the fowl and the beast brings about a response. David hears of her vigil and he takes the time to bury the bones of her children, to give them that bit of dignity.


While the widow of Luke 7 was the first woman I thought of while thinking about Rizpah this week, I come to find that there is a different woman who I think of now.


Another woman who stood and grieved the death of a son hung to die. A man whose life was given to erase a bloodguilt. The men of the time mostly scattered, perhaps convinced now that it was all the same politics and an ending in death is a tale as old as time. Her name is Mary and his is Jesus. The Gospel according to John says that Mary the mother of Jesus was at the cross and then went with the "Beloved Disciple" to his home before Jesus breathed his last. The other gospel accounts tell of women who remained. They watched and kept vigil as he died, they sat across from the tomb after Joseph of Arimathea buried the body of Jesus. Then, when resurrection dawned, it was to one of those women keeping vigil that the risen Lord first appeared.


Rizpah was a concubine. She lost her sons. She had little ranking or power in her world. What we know about her life is found in one chapter of the Bible. And, yet, her story moves us. We identify with the passionate outrage to force people to look at the consequences of their decisions. We understand the grief that will do anything - even camp out on a rock night and day fighting off birds and beast if only we can preserve some time and memories. We relate to wanting to look and to make other people look at the world and the consequences of our actions.

Her actions, and those of women centuries later at the foot of another cross, as well as the response they garnered from Kings of Heaven and Earth are testament to the power of bearing witness.

Email ThisBlogThis!Share to TwitterShare to FacebookShare to Pinterest
Labels: FeminineFridays